I have a particular penchant for Paris Haute Couture Week, unlike other fashion weeks. I love that it is a celebration of fashion, a parade of gowns that together promulgate the industry’s love of fashion. And love is precisely the vein that runs through every look – each the result of labors of love by the designers who envisioned them, the artisans who hand make each garment, the hair stylists and makeup artists who transform the garments into looks, and the models who bring them to life before an adoring audience.

These are not clothes meant to be worn; they are works of art, drawing attention to the creativity and innovation that drive fashion – apt for an industry rooted in artistic tradition. Haute Couture distinguished itself by turning its cheek from the commercialism that dominates the rest of the industry, at least for the most part. As most of the industry strides into the future, streamlining, manufacturing and maximizing production for mass consumption, Haute Couture takes respite in the small alleyways of tradition, away from the highway commotion of incessant engines of production; it reverts to the historic conventions of clothes-making, paying homage to the time when clothes were designed and made for one wearer and one wearer only.

But, much as I may wax poetic about the exquisite significance of Haute Couture, I acknowledge its remoteness from the everyday woman. Beautiful to look at, of course, but decadently unattainable – or just impractical. As a lover of fashion, I constantly seek ways to bridge the gap between runway and real life; Haute Couture poses a uniquely ambitious but equally satisfying challenge to extract from a near infinite range a select few artistic elements and fuse them to create less extravagant iterations of the original creations, such that we all have the ability to sport garments that celebrate the wonders of Haute Couture. Below are several of my favourite shows from Paris Spring Couture 2018, and my reimaginations of what these pieces could look like if they worn in everyday life.

I love you, Karl Lagerfeld, but this collection may have just made Clare Wright Keller my favourite contemporary designer. I have always had a soft spot for Givenchy, which stems from my love for the creator of the house himself – Hubert de Givenchy. His innovative contributions to fashion moved the industry away from the ultra-feminine silhouettes created by Dior’s New Look, introducing designs that proposed the revolutionary notion that clothing need not be cut in hourglass shapes to be feminine and flatter the female figure. Add to that his legendary friendship with my favourite actress and icon, Audrey Hepburn, and it would be impossible for me not to love him. 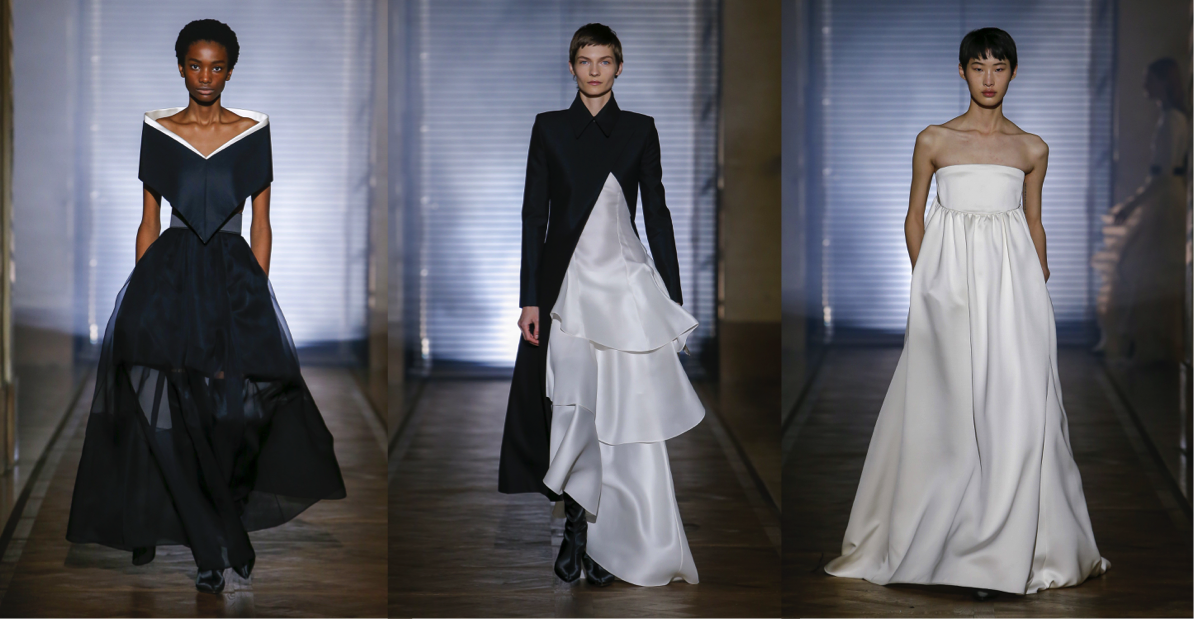 From the moment I saw the opening look at Givenchy, I knew it would be my favourite show, because the vestiges of Givenchy’s legacy were imbued in every garment in the collection. Keller, evidently paying homage to the origins of the house, presented a series of monochromatic outfits that, void of loud patterns, shone because of their simple designs that created sophisticated silhouettes. Unique necklines, structured skirts and elegant gowns made their way down the runway; my personal favourites was the white empire waist gown, a wonderful hybrid of one of Hepburn’s Sabrina frocks and another Givenchy piece from her personal collection.

My interpretation of Givenchy’s looks features the same black and white scheme. The top offers a more wearable take on the wide V-shaped neckline, with feminine touches of ruffled sleeves and wide bows. The skirt, while completely plain, provides both structure and a degree of fluidity – a skirt that moves with you. The clothes are paired with sock boots to elongate the body. Perfect for opera nights, galas, and fancy dinner parties.

If Keller’s designs at Givenchy were a celebration of simplicity, Guo Pei’s were the opposite: the epitome of extravagance. In a relatively modest collection for Pei, the Chinese designer explored the possibilities in pairing hues of blue with her perennial favorite color, gold. Yes, you read correctly, modest–less modest creations include the sea of yellow fabric that was Rihanna’s 2015 Met Gala dress. Her inspiration from imperial Chinese court designs are patent in each piece. Lavish embroidered silk and satin fabrics were sewn into fluid silhouettes, juxtaposed with spiky, barbed gold metal in the form of headpieces and protruding dress décor. The result was decadence with an edge: a textbook lesson on how to dress elegantly while still looking cool. 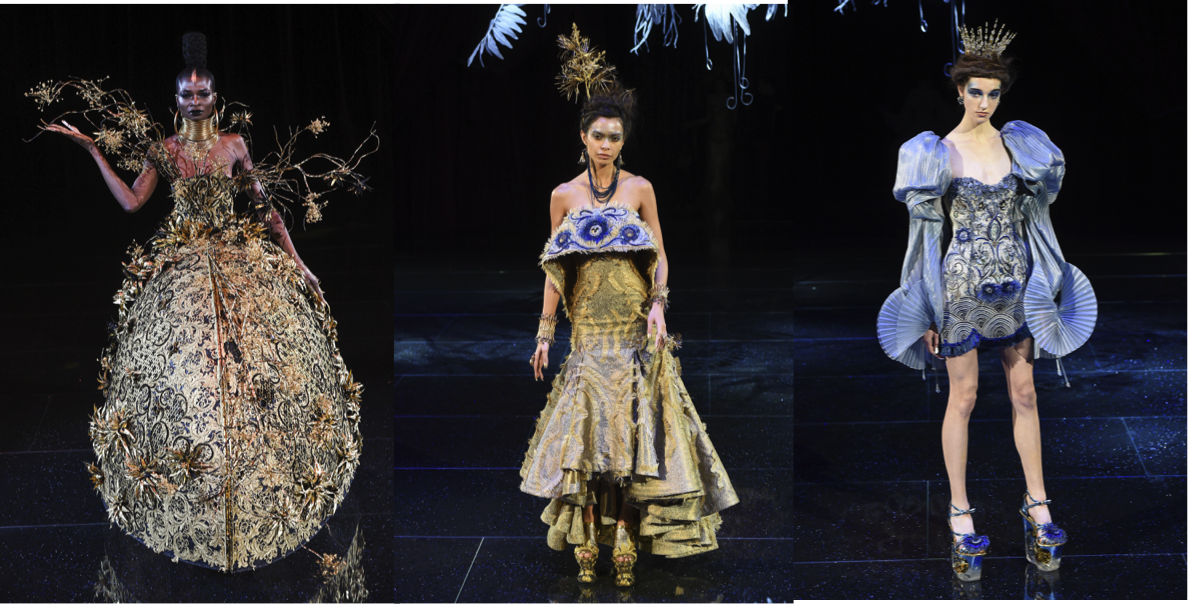 This was perhaps the hardest of the three shows based on which to fashion a look – the extraordinary grandeur of Pei’s work simply cannot be adequately relayed in ordinary clothing. Consequently, I drew most inspiration from the colour scheme, attempting to style pieces such that it would not seem an outlandish combination for quotidian wear. This casual derivative features a navy-blue silk floral kimono as the centrepiece, a nod to the patterns of embroidery on Pei’s dresses. Underneath, a simple tank top and high-waisted jeans, maintaining emphasis on the outer layer. The gold component: gold buckles on the loafers and statement jewellery. Ideal for the fashion-forward lot who are yet simultaneously unwilling to sacrifice comfort.

Pierpaolo Piccioli’s Valentino show exhibited an array of thematically-grouped pieces, many of them reminiscent of the house’s iconic designs, but it was the first ten or so looks that captured my attention. Together, they constituted Piccioli’s greatest contribution to Spring Couture 2018: the message that pants, too, have a place in Haute Couture. The combination of beige tones and bright colours was striking but remarkably wearable. The cut of garments created loose, flowing silhouettes – what I like to call ‘empowering’ clothes, because of their length and movement properties. The elements of colour elevated looks from mundane to piquant, making them classics with a twist. 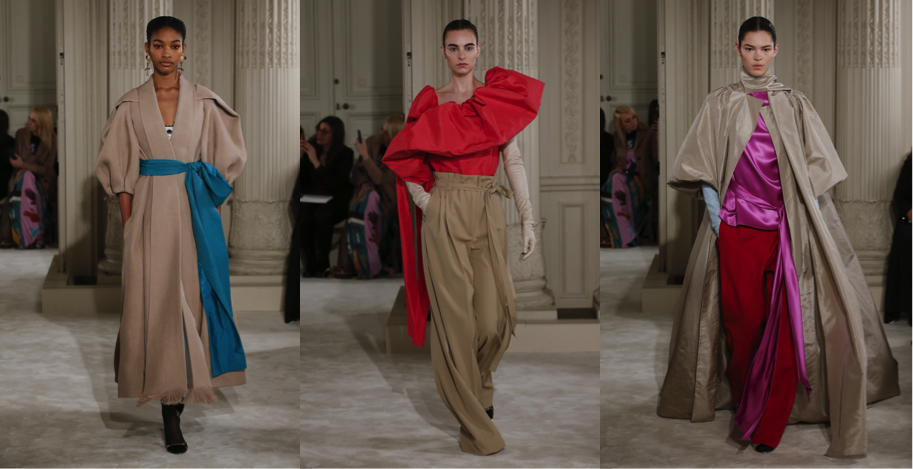 This look is simple, consisting of only four items of clothing. It is grounded in the neutral coat and pants; a red sweater adds subtle color detail, while red heels echo the chromatic scheme. The contemporarily popular sock boots modernise an otherwise classic outfit. Power suiting without a suit for the modern workman.